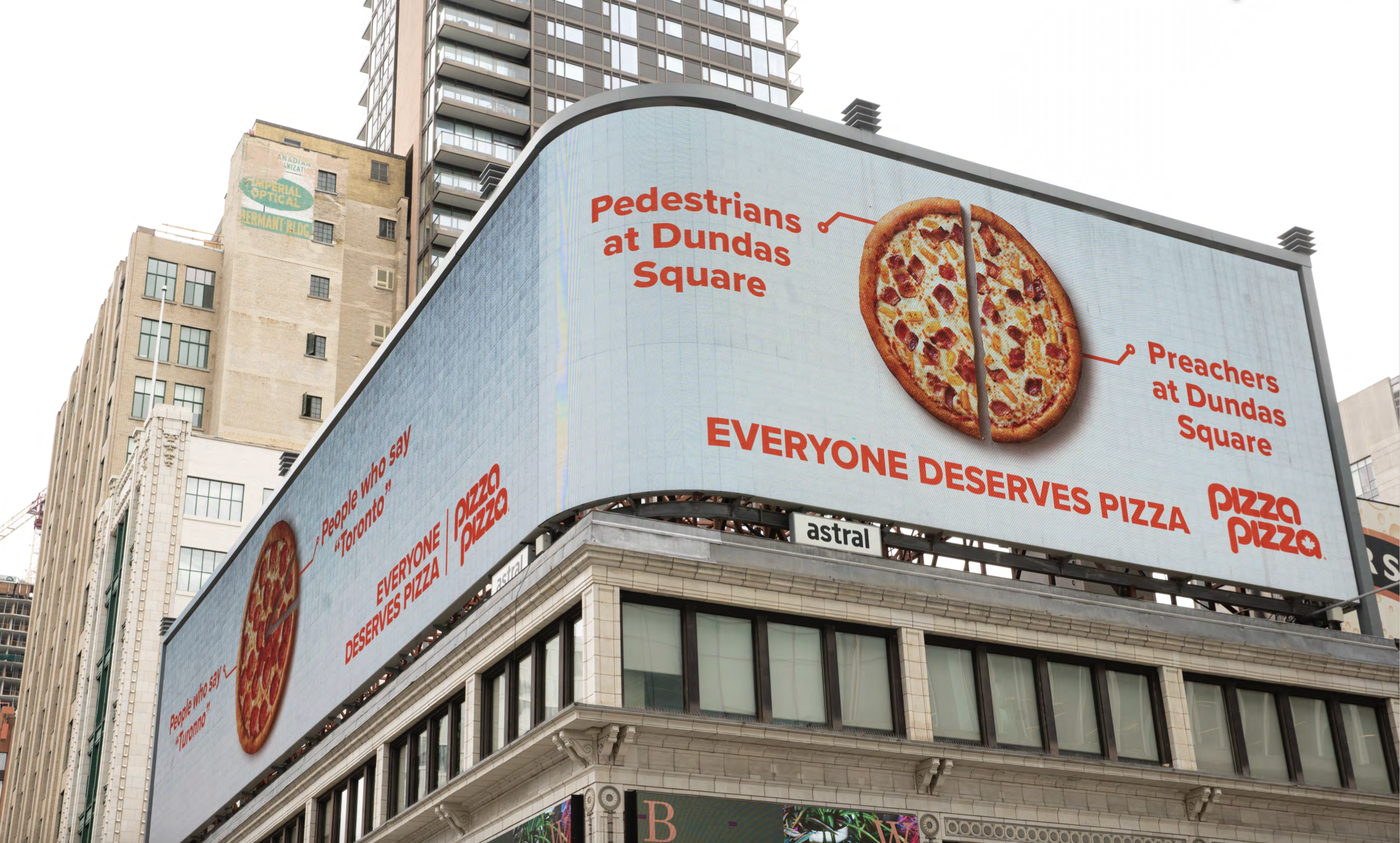 If there’s one thing that can unite all Canadians, no matter their favourite music, social media preference, or whether they like cats or dogs – it’s the joy and satisfaction of a delicious hot and fresh pizza. This is demonstrated In Pizza Pizza’s latest campaign rollout, in which the homegrown QSR turns pizza pies into clever and culturally relevant pie charts.

A social placement shows a pie chart made up of ‘Facebook users, ‘Twitter users, and the notably smaller group of ‘Myspace users. A highway OOH board compares ‘People who carpool’ with ‘People with pools in their cars’. Meanwhile, a Yonge and Dundas execution contrasts ‘People who say Toronto’ with ‘People who say Turronno’ – an ongoing local debate. Each ad is punctuated with the platform line ‘Everyone deserves Pizza’.

The platform supports the belief that everyone has the right to delicious pizzas that suit their tastes, price point, delivery method and location. “As the brand that aims to represent all Canadians’ pizza-related wants and needs, the pizza pie charts are the perfect demonstration of our commitment. At the same time, we wanted to stay true to our brand personality and bring some levity to Canadians. ” said Adrian Fuoco, Vice President Marketing.

Home is where the heart is this Remembrance Day: The Legion National Foundation and HomeEquity Bank remind Canadians of wartime sacrifice with Letters Home, a new Digital Poppy fundraiser that shares real letters from Canadian soldiers with current h

In honour of Canadian veterans who served their country in the Canadian Armed Forces, HomeEquity Bank, provider of the CHIP Reverse Mortgage, is... Читать больше
AGENCY: ,

Agencies are obsessed with winning awards. Yet, funnily enough, the most award-winning work isn’t usually the most well-known. If you asked your... Читать больше
AGENCY: ,

The world’s first encyclopedia for microaggressions, The Micropedia of Microaggressions, launched in December 2021 and has since been used in over... Читать больше
AGENCY: ,

In the second campaign under their new brand platform, ‘welcome to uncommon’, Subaru sets out to honour and celebrate their wonderful owners! At... Читать больше
AGENCY: ,
Далее