The new chief creative officer at Wunderman Thompson Benelux is on a mission to mix things up. 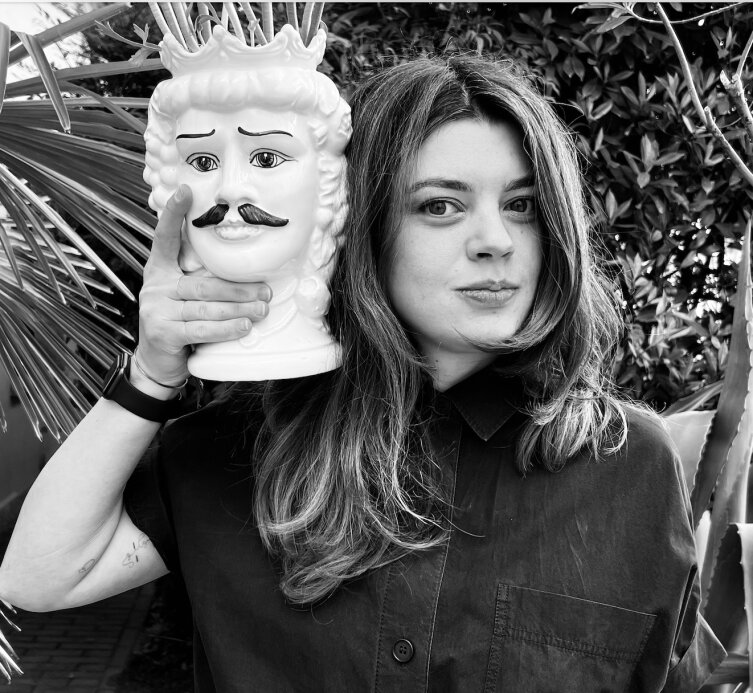 Aiming to reign. Sandra Bold with a friend in Italy.

Having just taken on a new role as CCO of Wunderman Thompson Benelux – after almost four years at Publicis Italy, most recently as global creative director – she’s well on her way. Even her boss, global chief creative officer Bas Korsten, refers to her in an email as a “rock star”.

To put that first quote in context, Sandra was explaining why she chose to become a copywriter. “Because I didn’t know much about the industry at the beginning, I was under the impression that only copywriters became famous creative directors. So I thought I’d better do that!”

She grew up in Romania, where her initial ambition was simply to do something creative. She describes the Romanian creative culture as a grab-bag of influences, taking elements from here and there and smashing them together to make something new.

“At least that’s the way I experienced it. It was a very confusing post-Communist upbringing. There wasn’t much of a structure or legacy. So you’d see commercials, like commercials, and try to understand why you liked them. The same with a film, or an art show, or something you’d seen online. Just grab everything from all over and try to quench that thirst in your own way.”

Her first choice was architecture. “It was sort of compromise between creativity and something ‘serious’. Eastern European parents want you to study something respectable and money-making; but that comes from a good place, where they want to assure a good future for their kids. So architecture was creative to satisfy me and serious to satisfy them.”

Those commercials kept beating at the door of her consciousness, however. “I found myself looking at ads and ad blogs whenever I had any spare time. And so I realised that, yes, it’s advertising I want to do.”

She finished her architecture studies and was already working in the field when she decided to switch. “I decided it was now or never. Better to do it while I was still young. But then I had to start from scratch, applying for jobs and internships.”

She also entered ad competitions – “I would obsess over them”.

Her dedication paid off: since her first job at Bucharest agency Mercury360 – as a copywriter, naturally – she’s worked only for big names. Saatchi, McCann, Publicis…and now Wunderman Thompson.

“I met Bas Korsten on a jury and we appreciated each other’s way of thinking,” she recalls. “So we had a conversation afterwards about his feeling that I might be a good addition to the Wunderman Thompson family. In general, when I feel the most scared about making a jump, that’s when I find it the most attractive. I like to go outside my comfort zone, because that’s where I’ll grow. I’m more worried about being stuck in a sea of same than trying something new and learning from it, no matter what the outcome.”

I ask her if she’s attracted to a certain type of creative project. After a moment’s hesitation she says: “I’m treating this interview like therapy, where you say the first thing that comes to mind. So here the first thing that comes to mind is that I like to blow shit up! I like to challenge things, re-phrase or re-frame them. To turn something upside down – that’s the kind of project that makes me happy.”

She prefers not to cite projects from her previous agencies, as she doesn’t think it would be fair to her new employer. But you can see plenty of them on her entertaining website, which started as a portfolio and is now a good expression of her witty personal brand. She also has an entertaining Instagram account. “That’s because I can always fall back on my latent career of being an influencer,” she jokes.

In that guise she once pledged not to buy clothes for a year. Fashion is an expression of her creativity – but she was becoming an addict. “My budget and my wardrobe could no longer handle it. I was also ashamed, because I would compulsively buy things and then not wear them – or only wear them once. Something had to be done. And it couldn’t be done in a soft way, because it’s like being a junk food junkie. You have to be tough with yourself to stop.”

Holding herself accountable in public meant she couldn’t cheat. “Or if I cheated, I’d have to admit it. So it helped me to stop – and also to write a bit more. It was beneficial on many levels.”`

Another discovery from her website is that she once relaunched a forgotten Romanian watch brand with friends. “The brand was available, so my friends bought the rights and we said, ‘OK, let’s go for it.’ It was hard work – but fun. It’s the kind of thing you only do when you’re young and don’t worry about the consequences. But it taught me that you should always be like that. Try things without worrying too much about the outcome, because you’ll make it work somehow. Remember to be foolish.”

In another project outside her day-to-day work, Sandra is helping to forge more female creative leaders, initiating the Lady Steps program with ADC Romania. She thinks there has been some improvement, but from a very low base. “By which I mean it was down in a pit and burning. It’s come a long way, but there’s still a lot of work to be done. I feel some people relaxed, in terms of, ‘Oh, we’ve won five awards for gender equality, let’s move on to the next thing.’ It may not be burning any more, but the situation is still in a low and dark place. It’s needs to be a long and attentive process.”

She hasn’t yet unveiled any major projects at WT, but they’re certainly coming: at the time of our conversation, she was about to hop on the latest in a series of flights, to London. “I think I’ve only spent about two nights at home in the last three weeks.”

As somebody once said, people tend to underestimate the importance of the word “work” in the phrase “work of art”. But my guess is that Sandra has the energy – and the motivation – to get the job done.

All Aboard for a Pirate Football Game

This book was their baby: Epica Awards PR Grand Prix

Mercedes Erra, co-founder, BETC: “Immigration made me who I am.”
Previous
Interview