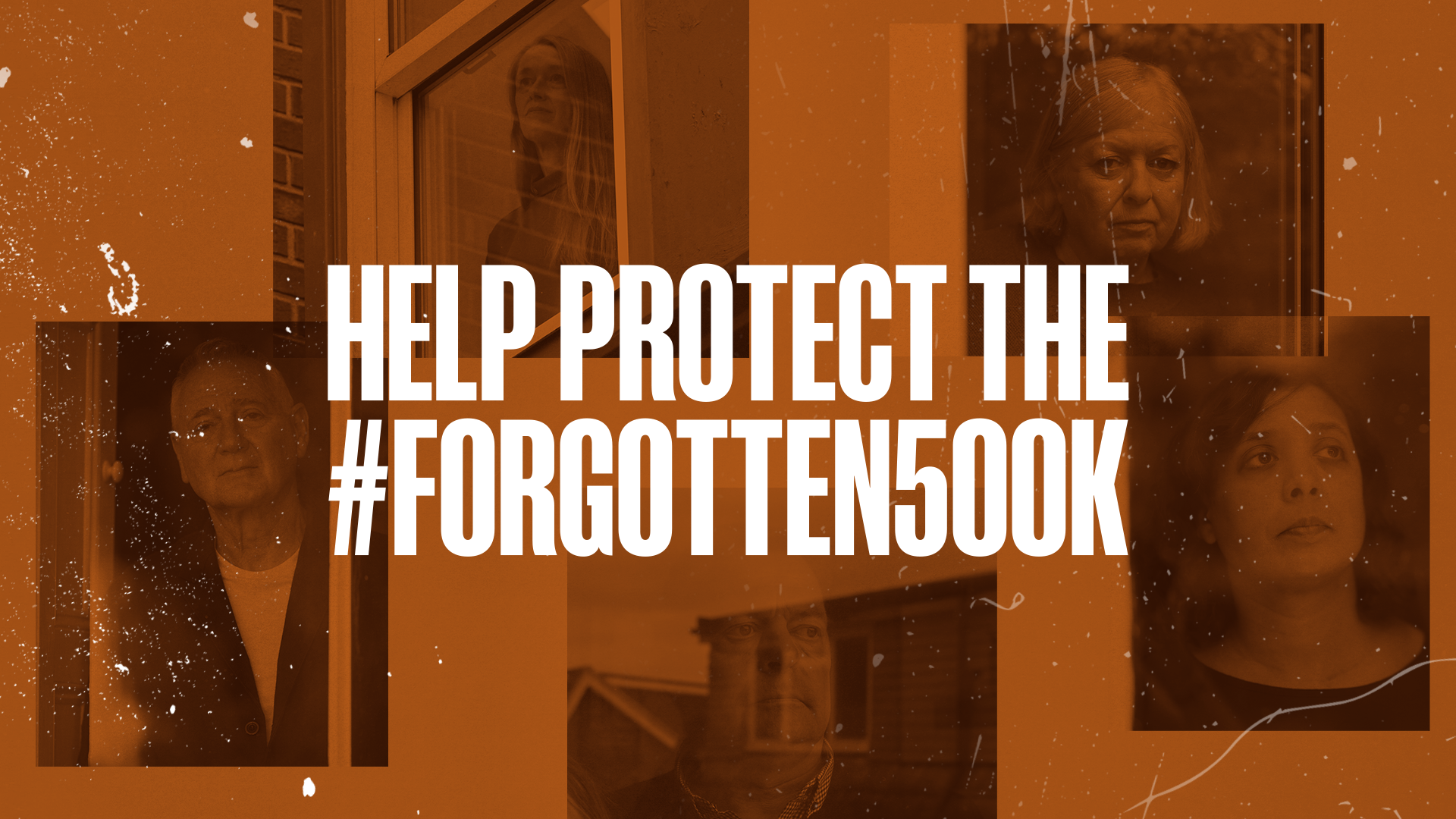 A new campaign launches today in the UK to raise awareness of the #Forgotten500k and their families, many of whom are still living restricted lives at huge risk from Covid-19. Around 500,000 immunocompromised people across the United Kingdom are at higher risk from the virus because their weakened immune systems make them less likely to respond well to vaccines. Many are still shielding, still in isolation, still unable to work, see friends or hug loved ones. Yet their pleas go unheard.

Patient groups, charities and clinicians are urging the Prime Minister and Health Secretary to reverse a decision made under their predecessors to deny vulnerable patients access to an important treatment: Evusheld.

The rollout of Evusheld is urgently needed this winter to help protect the immunosuppressed from Covid-19 as we see rates rise again. This drug would allow this group to return to a higher standard of life. Currently the UK is at odds with over 32 other countries who have approved the drug and who are already months into their rollout scheme. Yet still the UK Government won’t make it available on the NHS this winter.

The #Forgotten500k launches with a new national advertising campaign today created by The&Partnership, kicks off with a series of events and activities which includes a special podcast from Crisis What Crisis? a silent vigil in Parliament Square and a Tortoise Media ‘Think In’.

The campaign allows the #Forgotten500k to be seen, to build connections and to be heard through their personal stories. The goal is to change the Government’s decision.

Professor Martin Eve, PHD, a member of Evusheld for the UK explained, “The clinically vulnerable of the United Kingdom were promised protection. Instead, they have been abandoned and forgotten. While the rest of the world takes care of its immunocompromised using Evusheld, the UK delays without delivering. Our patients need protection now and the current government schedule is just not good enough. Our members lead intolerably restricted lives, will suffer the mental health effects of 1,000 days of isolation for years to come, and are dying at much higher rates than the general population with Covid-19. The Secretary of State for Health has a clear answer: procure Evusheld, protect the vulnerable, and alleviate pressure on the NHS.”

Monday 17th October / Crisis What Crisis? Podcast
Guests Professor Martin Eve and Dr Lennard Lee talk to host Andy Coulson about the campaign and what life has been like for the forgotten 500,000.
Listen here

Wednesday 19th October / Westminster advertising
An advertising van will loop around Westminster with powerful messaging addressing the Government. The advertising creative was designed pro bono by The&Partnership in collaboration with patients, charities and clinicians. Professional photos will be shared with the media on the day.

Wednesday 26th October / Silent Vigil in Parliament Square
Family and friends of the forgotten 500,000 will stand in Parliament Square holding photos of their loved ones who are unable to be there in person because of the risk of illness. Media will be invited.

Gemma Peters, Chief Executive for Blood Cancer UK, said: “Over one in 100 people with blood cancer have died of Covid, and many thousands more are continuing to experience the mental health burden of trying to avoid it. There is good reason to believe Evusheld would give significant protection to our community, and so the Government’s refusal to make it available is missing the chance to do something that would both help keep them safe and get back to their normal lives. In doing this, the Government is insisting on a level of certainty for Evusheld that goes far beyond the level of certainty it needed before it bought the original vaccines in 2020, and is letting down immunocompromised people.”

Lexus and The&Partnership have launched a new action-packed campaign, ‘Stay Ahead’. The campaign firmly positions the all-new RX as the... Читать больше
AGENCY: ,

British Gas has launched a cross-platform campaign championing their ‘Money Saving Engineers’. The campaign highlights the ways in which the 7,500... Читать больше
AGENCY: ,

M&M’S® new campaign inspires you to Halloween your way

For the first time since their brand relaunch, M&M’S® have released a new Halloween campaign. The campaign relays the message that whoever you... Читать больше
AGENCY: ,

To celebrate the launch of their new handwash, the latest product in the INEOS hygienics range, INEOS has delivered a new brand campaign - You Can... Читать больше
AGENCY: ,

The&Partnership Manchester appointed as creative agency of record for TransPennine Express and the Transpennine Route Upgrade.

In a jointly held pitch, The&Partnership Manchester has been appointed the agency of record for TransPennine Express (TPE).... Читать больше
AGENCY: ,
Далее