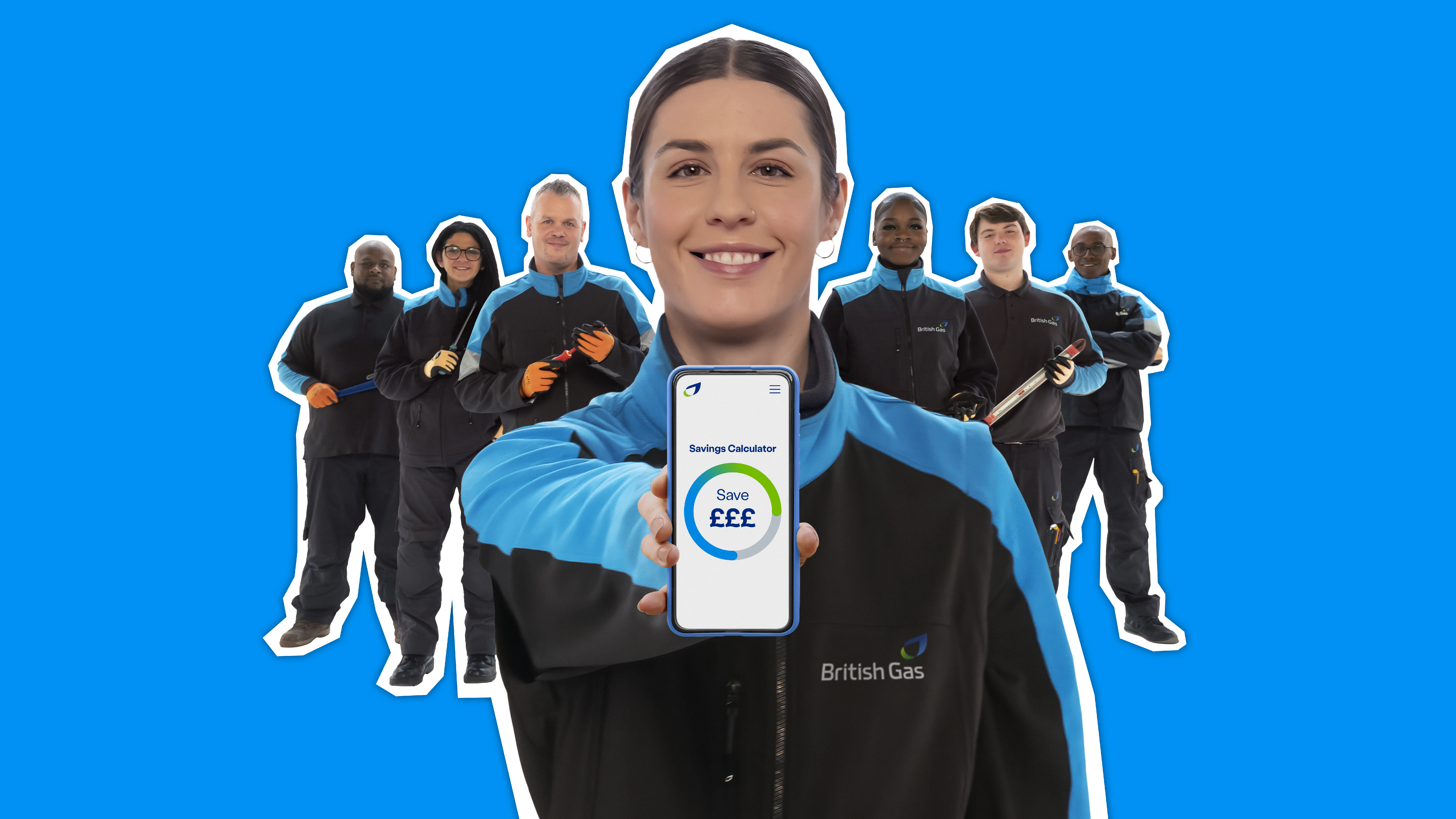 British Gas has launched a cross-platform campaign championing their ‘Money Saving Engineers’. The campaign highlights the ways in which the 7,500 UK-wide British Gas engineers, along with the products and services they offer, can help customers save money and manage their household bills.

The campaign also marks the launch of a new, first of its kind free savings calculator. In just a couple of minutes, customers and non-customers alike can answer a few simple questions on their home and energy habits, to receive a clear breakdown of how much money they could be saving and how.

Money Saving Engineers follows on from this winter’s Straight Answers campaign, in which British Gas has helped to answer the nation’s big questions and to provide clarity in what continues to be a very uncertain time in the energy market. Now, with 1 in 2 people continuing to experience anxiety about being able to pay their bills*, British Gas highlights how their trusted engineers can help. Whether it’s with energy-efficient products, HomeCare services, or just helpful advice, British Gas engineers continually strive to equip homes for significant long term savings and protect customers against unexpected repairs.

Creatively conceived and executed by The&Partnership, the campaign features real British Gas engineers set in a heavily branded, dynamically animated cyan blue world. By placing real engineers front and centre, the campaign tells a credible story rooted in the company’s everyday operation - working across the UK to not only to keep homes warm and working, but to propel the nation toward a more energy-efficient and cost-efficient future.

Packed with positive energy, the work reflects the confident, solution-based attitude of the brand. Not least embodied by the campaign soundtrack, Mr. Blue Sky by Electric Light Orchestra, injecting some much-needed optimism to help the nation start the year on a positive note.

This is the first campaign for OMD, who won the British Gas account in an incredibly competitive pitch last year, delivering the media strategy, planning and buying of Money Saving Engineers. Strategically elevating the approach to deliver commercial objectives at a portfolio level, the campaign is running across TV, VOD, DOOH, Radio, Digital Audio, a publisher partnership with Reach Plc, Programmatic Display and Video, Paid Social and Paid Search - a fully integrated and through the funnel execution. The media was planned to hero the Money Saving Engineers in high impact and attention channels, whilst using more contextual or addressable channels to deliver pertinent messages to different audiences, optimising the campaign to speak to customers for a more relevant and engaging experience, and a more efficient marketing approach.

Burson Cohn & Wolfe (BCW) will amplify the campaign through PR by leveraging the new year, new you rhetoric to encourage households to think about their homes through a health lens, by taking advantage of the offerings of Money Saving Engineers to achieve a new year, same home (but better) in 2023.

Andy Freeman, Marketing Director, British Gas says: “Our expert engineers know the nation’s homes like no one else. They have the experience, skills and tech to help save our customers money which, right now, is more important than ever. Putting them at the front and centre of the work, and capturing their positive and proactive attitude, were priorities for us on this campaign.”

Toby Allen, Executive Creative Director, The&Partnership says: “Other brands have to invent money saving characters. British Gas has 7,500 real engineers helping people save money every day. We wanted to match their positive action with positive energy. Bright and bold visuals designed to stand out in the greyest of months. Money Saving Engineers aims to galvanise the public and commit to a sustained effort to bring down bills on a national scale. The engineers themselves embody British Gas’ proactive spirit and dedication to helping today and changing tomorrow.”

British Gas helped establish the British Gas Energy Trust in 2004 to ensure support is available for everybody, no matter their energy provider, and has increased donations to the Trust over the course of the energy crisis. In addition, British Gas is investing in long term energy security by building better infrastructure, increasing its focus on renewable energy, and working alongside Norwegian gas suppliers to power an additional 4.5m homes.

Lexus and The&Partnership have launched a new action-packed campaign, ‘Stay Ahead’. The campaign firmly positions the all-new RX as the... Читать больше
AGENCY: ,

A new campaign launches today in the UK to raise awareness of the #Forgotten500k and their families, many of whom are still living restricted... Читать больше
AGENCY: ,

M&M’S® new campaign inspires you to Halloween your way

For the first time since their brand relaunch, M&M’S® have released a new Halloween campaign. The campaign relays the message that whoever you... Читать больше
AGENCY: ,

To celebrate the launch of their new handwash, the latest product in the INEOS hygienics range, INEOS has delivered a new brand campaign - You Can... Читать больше
AGENCY: ,

The&Partnership Manchester appointed as creative agency of record for TransPennine Express and the Transpennine Route Upgrade.

In a jointly held pitch, The&Partnership Manchester has been appointed the agency of record for TransPennine Express (TPE).... Читать больше
AGENCY: ,
Далее