Goldfish launches larger cracker with an urgent message to robots: Mega Bites are not Megabytes. 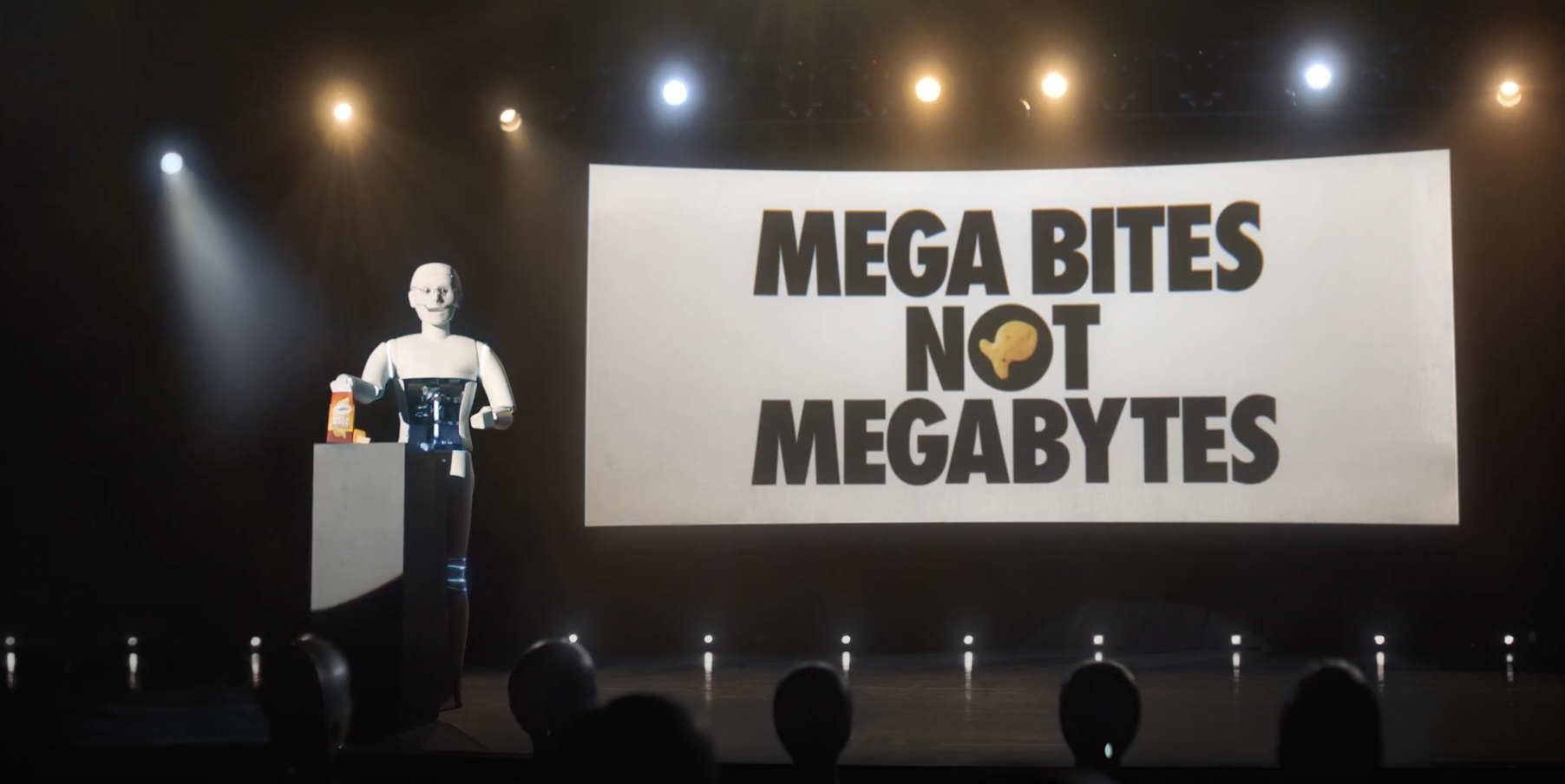 Goldfish has enlisted a robot spokesperson to clear up any confusion about its new, larger crackers. In the campaign, the robot addresses an audience of fellow bots, warning them that new Goldfish “Mega Bites” are delicious crackers for humans, not “megabytes” for robots. It then proceeds to eat the Mega Bite, which literally blows its mind.

While Goldfish is a familiar household snack, in its latest product innovation, the brand is launching its first line of crackers geared towards adults. New Mega Bites are 50% bigger than regular Goldfish with bold taste and big crunch. The product aims to expand household penetration of Goldfish in an increasingly competitive cracker category.

“Knowing we were entering a cluttered category in the adult cracker space, we needed to break through while being clear about our product benefits. The robot character was the perfect foil to introduce Mega Bites in a playful and memorable way, and we saw in focus groups that the humour resonated,” said Paloma Bentes, Marketing Director – Snacks at Campbell Company of Canada.

The 360 digital campaign was created by agency partner Zulu Alpha Kilo. In addition to three online spots, the campaign includes a 3D out-of-home billboard at Yonge and Dundas, developed in partnership with Astral Media, which shows the robot breaking through the digital billboard, grabbing a Mega Bite and quickly malfunctioning.

“To catch consumers’ attention, instead of showing a typical bite-and-smile moment, we decided to show a bite-and-head-exploding moment. The robot is the perfect balance of maintaining the playful spirit of Goldfish but in a clever way that ages up the brand as we broaden consumption to a more mature audience,” said Brian Murray, Executive Creative Director at Zulu. “Also, anyone who sees the campaign will never forget the name of the product.” Additional campaign channels include bespoke sound-off optimized social assets which will run across Meta, Snapchat and Tik Tok. The campaign will also be extended with a unique execution in the metaverse launching mid-October.

The creative concept was adapted by partner, The French Shop, specifically for the Quebec market. Goldfish Mega Bites are now available in grocery chains across Canada with the campaign running through the fall. Media was planned and bought by Spark Foundry, with PR efforts led by Proof Strategies, and in-store POS by The Mars Agency.

Home is where the heart is this Remembrance Day: The Legion National Foundation and HomeEquity Bank remind Canadians of wartime sacrifice with Letters Home, a new Digital Poppy fundraiser that shares real letters from Canadian soldiers with current h

In honour of Canadian veterans who served their country in the Canadian Armed Forces, HomeEquity Bank, provider of the CHIP Reverse Mortgage, is... Читать больше
AGENCY: ,
Далее